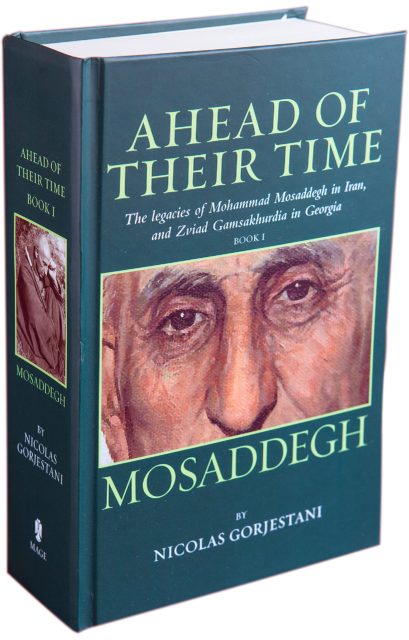 Iran’s Mohammad Mosaddegh and Georgia’s Zviad Gamsakhurdia were two of the most consequential national leaders of the twentieth century. Nicolas Gorjestani examines, in two separate volumes, each leader’s life story, resistance strategy, governance, reform record, and overthrow. The two books combine insightful memoir, strategic analysis, economic assessment, and historical review to weave a compelling narrative that gives the reader a front-row seat to the transformational events that unfolded in Iran in the 1950s and Georgia in the 1990s.

The similarities between these two patriots are remarkable: their personal background, vision, governing philosophy, political destiny, and legacy. With courage, passion, and tenacity, they took on domestic establishment elites to fight against authoritarian or arbitrary rule. Both leaders shared a vision of a modern, democratic state, and, to that end, undertook pathbreaking political and socio-economic reforms. They also challenged the world powers to end colonial domination of Iran and Georgia and to reestablish national sovereignty.

Mosaddegh (Book 1) locked horns with Winston Churchill, Harry Truman, and Dwight Eisenhower in 1951-1953 over the nationalization of Iran’s oil industry, while Gamsakhurdia (Book 2) stood up to Mikhail Gorbachev and George H. W. Bush in 1990-1991 over independence from the Soviet Union. Their governance was cut short as both leaders were overthrown in similar paramilitary coups. Mosaddegh was toppled in the first post-WWII regime change organized and supported by the British MI6 and American CIA; Gamsakhurdia was deposed in the first regime change in the former Soviet space supported by the Soviet military.

Nicolas Gorjestani is a former senior official of the World Bank with economic development experience spanning more than four decades in countries undergoing transformational change. The result of decades-long study and research utilizing multiple primary sources, these two books provide a unique perspective based not only on the author’s professional experience but also on his intimate knowledge of both Iran and Georgia. Born in Iran of Georgian heritage, Gorjestani has maintained cultural links with both countries, and followed their political economy for more than half a century. He lives in Washington, D.C.